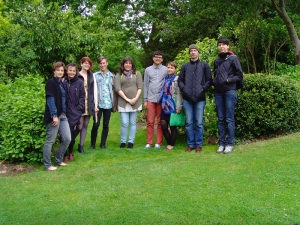 registered but could not obtain her visa in time). The seminar brought together philosophers and artists. The theoretical level was quite good and the atmosphere relaxed and friendly. The main themes approached were: sexuate individuation, education, and techonology; nihilism and Eastern traditions; same-sex marriage; migrant travels; the contribution of art towards a new culture and society, especially regarding difference, hospitality and feminine creativity. It was a successful seminar.

Encountering the Other and Building Third Spaces through Migrant Travels by Ada Demaj
(PhD Candidate, Women’s Studies, University of Western Ontario, Canada)
My research will focus on a specific kind of travel, return visits, as experienced by 1.5 generation Albanian women migrants to Canada. Considering return visits as movements between a place of current residence and a place of ‘origin,’ or birth or previous dwelling (for a significant period of time) and back again, as undertaken by migrant groups (see David Duval ‘Conceptualizing Return Visits: A Transnational Perspective,’ in T. Coles and D. Timothy (eds) Tourism, Diasporas and Space. London: Routledge, 2004), I will undertake interviews with participants in order to get at the structural features of this type of travel–in other words, I will attempt to realise a phenomenology of their travel. Read more . . .

The Forms Children Take: Sexuate Difference and the Generations by Julian Gill-Peterson
(PhD Candidate, American Studies, Rutgers University, USA)
Within the vertical lines of genealogy and descent, what we term with far too much facility ‘the child’ is rendered in the neutral and functionalized as a form of property of the father by being separated from its original relation with the mother.  This is, in more familiar terms, the oedipal triangulation of phallocentric kinship (see for instance Luce Irigaray, ‘Psychoanalytic Theory: Another Look,’ in This Sex Which is Not One, trans. by Catherine Porter and Carolyn Burke, Ithaca, NY: Cornell University Press, 1985, pp. 34-68). When the couple produces a child, they frequently lose their difference in its abstract oneness, while the child is in turn locked into a similarly abstract naturality by teleologies of development that demand nothing other than growing up into adulthood.  From birth, the natural education of children aims at concealing their sexuate difference and assimilating them into the emptiness of the presumed universalized human subject, a masculine subject.  Read more . . .

Ogham Now, Woman Here: A study of language and mark-making by Meghan Hedley
(Artist and Masters, Washington State University, USA)
Full moments pile. Memories layer. My thoughts and emotions trace time and space as I move backward, as I veer forward, and as I remain still. This is disorder and order, sound and silence. I proceed from point A to point B, but also from point Z to point H to point M to point P to point X to point D. My painting and writing space is composed of intuitive, layered mark making. I return to past and reform my present to sketch an open, not always comprehensible language between-two different subjects. Following Luce Irigaray’s words, I intend ‘to lay out space so that a spatial architecture will allow for the existence of each one and the meeting between each one’ (Luce Irigaray, ‘Towards a Mutual Hospitality’ in The Conditions of Hospitality, ed. Thomas Claviez, New York: Fordham University Press, 2013, p. 43).Read more . . .

A Utopia Of Difference: A Sculptural Investigation in Relation to the Thought of Luce Irigaray by Elizabeth Matthews
(PhD Candidate, Burren College of Art, National University of Ireland, Galway, Ireland)
The aim of my project is to open up, through art practice, a new understanding or knowledge of the utopian impulse as present in the human experience, especially as it forms a compelling social critique. The first question addressed is thus, how can ‘practice’ create knowledge, rather than resorting to the traditional academic method? Irigaray speaks of woman’s attempt to make something invisible appear, saying ‘this does not go without the risk of resorting to scientific perspectives or technologies instead of letting be and appear a part of us that our systems of representations, including our scientific systems, have considered irrelevant to their field’ (Luce Irigaray, ‘How to Make Feminine Self Affection Appear’, in Catalogue of the exhibition ‘Yow or Three or Something: Maria Lassnig and Liz Larner (February 4 – May 7, 2006) Graz: Kunsthaus, 2006, pp. 36-67). I have found that it is through a practice which attempts to this this that Irigaray’s ‘third ground’ makes its appearance to me (‘Being Two, How Many Eyes Have We’ from http://www.euppublishing.com/doi/pdfplus/10.3366/para.2002.2.). Read more . . .

Imagining an alternative symbolic order by Michaela Meise
(Artist in Berlin and Masters, University of Berlin, Germany)
Early in 2013, Luce Irigaray responded to my request for a collaboration on a piece of art, that was later exhibited in a group show at the Irish Museum of Modern Art in Dublin. During the process of exchanging letters and working on the display, I developed the desire to take part in Luce Irigaray’s seminar in Bristol. She proposed that I work on the question ‘Can art be a tool of transforming society?‘ Encouraged by the utopian vision offered in her early text ‘Commodities among Themselves‘(Luce Irigaray, in This Sex Which Is Not One, trans. Catherine Porter with Carolyn Burke, New York: Cornell University Press, 1985, pp. 192-7), I want to consider whether art can provide us with alternative social structures and models of communication that might better suit our needs and passions. Read more . . .

Technology and Sexual Difference by Monica Obreja
(PhD Candidate, Gender Studies, Linköping University, Sweden)
In my PhD thesis, I attempt to think the relation between technology and sexual difference, by arguing that this relation is contingent but non-arbitrary. The point of my argument is a critical interrogation of the classical sex/gender distinction which presupposes that the relation between sex and gender is contingent and arbitrary insofar as no causal relation should be presupposed between them. In line with this, a large part of feminist analyses of technology maintains that technology as a gender norm is not to be thought as essentially connected to masculinity, but in a contingent relation to it: mainly as a result of men’s historical association with technology. On the contrary, in my thesis I argue for an essential relation between masculinity and technology, that is expressed as a particular mode in which men live their sexuate identity. Read more . . .

Reading through Rainer Forst and Luce Irigaray: On Same-Sex Marriage by Louise Richardson-Self
(PhD Candidate, University of Sydney, Australia)
Rainer Forst refers to the example of same-sex marriage in order to demonstrate his ‘Respect Conception’ of tolerance in practice. This Respect Conception is characterised by a community of individuals who respect each other as autonomous and as having an equal basic right to justification. Here, the parties recognize each other reciprocally as equals, despite the fact that their ethical beliefs and cultural practices are deemed to be disagreeable. Tolerance is owed given the fact that all citizens are entitled to live by norms that they can accept and which do not favour one particular ethical party. Read more . . .

Sexuation and Individuation by Stephen Seely
(Women’s and Gender Studies, Rutgers University, USA)
In my project, I attempt to elaborate a theory of sexuate individuation by linking Irigaray’s work with that of Gilbert Simondon. According to Simondon, Western philosophy has ontologically privileged the individual over the processes of individuation that produce it. He thus replaces individualized ontology with ontogenesis as an ongoing process of individuation in which ‘individuals’ are generated from a ‘pre-individual’ fund consisting of matter, form, energy, and potentiality. While inanimate matter is individuated all at once, living matter retains a perpetual relation to this pre-individual fund, thus enabling an ongoing becoming. Furthermore, living matter individualizes itself at increasingly higher orders in response to ‘problems’ it encounters at ‘lower’ levels: from the physicochemical to the psychic, collective and technological.  These levels are all linked through a process of ‘transduction’ that enables communication running from the pre-individual potentiality to the transindividual collectivity. Read more . . .

Nietzsche’s death of God: A comparative analysis of Nishitani Keiji and Luce Irigaray’s creative responses to the problem of nihilism by Oliver Thorne
(PhD Candidate, University of Lancaster, UK)
We have an obvious problem diagnosed by Friedrich Nietzsche, nihilism: the risk of losing all our values and even any possible transcendental or foundational truth. Therefore, according to Nietzsche we are faced with the need for a revaluation of all values in order to regain a valid existence. Nishitani Keiji and Luce Irigaray respond to this Nietzschean challenge creatively in two radically different ways: the former through the idea of śūnyatā (Buddhist emptiness) and the latter with the idea of sexual or sexuate difference. Read more . . .