The aim of my project is to open up, through art practice, a new understanding or knowledge of the utopian impulse as present in the human experience, especially as it forms a compelling social critique. The first question addressed is thus, how can ‘practice’ create knowledge, rather than resorting to the traditional academic method? Irigaray speaks of woman’s attempt to make something invisible appear, saying ‘this does not go without the risk of resorting to scientific perspectives or technologies instead of letting be and appear a part of us that our systems of representations, including our scientific systems, have considered irrelevant to their field’ (Luce Irigaray, ‘How to Make Feminine Self Affection Appear’, in Catalogue of the exhibition ‘Yow or Three or Something: Maria Lassnig and Liz Larner (February 4 – May 7, 2006) Graz: Kunsthaus, 2006, pp. 36-67). I have found that it is through a practice which attempts to this this that Irigaray’s ‘third ground’ makes its appearance to me (‘Being Two, How Many Eyes Have We’ from http://www.euppublishing.com/doi/pdfplus/10.3366/para.2002.2.).

Utopia, in hibernation after World War II, has reappeared (Ruth Levitas, The Concept of Utopia, Great Britain: Phillip Allan, 1990). Often it is criticized. There are such criticisms against Irigaray’s writings (Amber Jacobs, ‘The Potential of Theory: Melanie Klein, Luce Irigaray, and the Mother Daughter Relationship’, Hypatia, Vol. 22 no. 3, September 2007). I think that these are a failure move forward from the patriarchal tradition, which requires validation in accordance with masculine values. Utopias are perhaps the myths of our time, and their contents a response to the present moment. Conceived in the wishful imaginings of the individual ‘such things show that however privately the dream rises, it contains the tendency of its age, and the next age…’  (Ernst Bloch, The Principle of Hope, Vol. 2, USA: MIT Press, 1986).  In this way, utopia features in what art does: it imagines, longs, and creates movement toward a better way of being. Irigaray’s work also does this in a poetic, inspirational, and practical way, and it is a starting point in my studio.

Irigaray states: ‘Men have become the only social subjects, and women are assimilated to objects of exchange between them’ (Thinking the Difference, Great Britain: The Athlone Press Ltd, 1994, p. 56; now distributed by Bloomsbury). Her inter-subjective alternative

is a world in which the subjectivity of women would be legally, morally, socially and culturally respected,  and she offers suggestions toward this end. On this aspect of her work she writes  ‘It did not seem to be ethical to go into a more sophisticated expose without proposing some simple and effective cultural modifications that might offer you a chance for life’(Luce Irigaray, Sexes and Genealogies, New York: Columbia University Press, 1987, p. 207). My personal life experience confirms what Irigaray says about the lack of a genealogy for women in our patriarchal culture ‘The between men culture excludes what the other sex brings to society’ (Je, Tu, Nous: Towards a Culture of Difference, New York: Routledge).

In my sculpture, ‘My Love to You’, I ripped old clothing into strips and wove them together into a large, colorful wall piece. 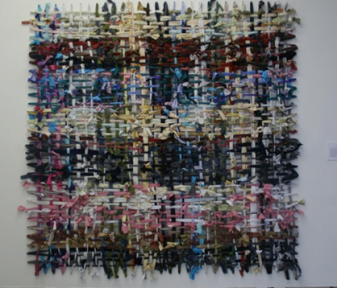 Through the process, layers of meaning, understanding, and questions emerged. How was this clothing made? What were the working conditions of the women/girls who made it? How did it affect my experience, my relationship with the women in my life, to have these goods available to me at such a low price?

I then began work with a video in which I imagined a wordless dialog with an 11-year-old Indian girl, who produced the clothing in slave-like conditions. 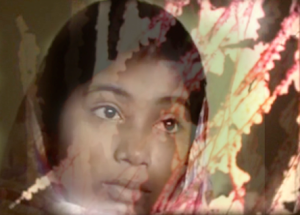 From there, I made another sculpture called ‘Absent Woman’. 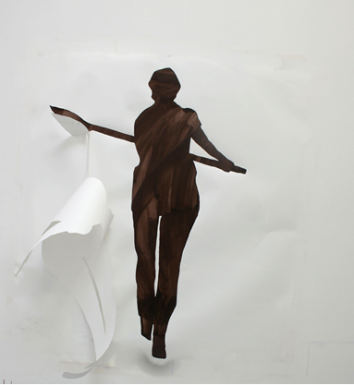 Finally, I framed figurative drawings with bread collapsing the boundary between public and private space. 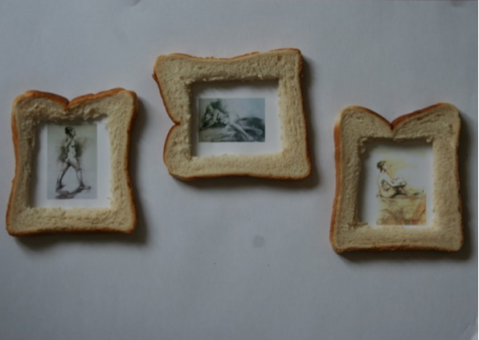 Questions about labor relations, and how women’s relationships to one another are affected by capitalism emerged, and dialog was created.

My interest is in utopia as a strategy I can employ as a woman in a patriarchal culture; my hope is that my viewer will experience a sense of possibility when viewing familiar materials in an unfamiliar, transformed way. If  ‘a tree gives us back our vision, gives us back to ourselves with a capacity for seeing, which we are deprived of by the familiar objects with which we are surrounded’ (‘Being Two, How Many Eyes Have We?’) then perhaps the making and sharing of art can do something like what a tree does. The utopian gesture calls to mind Foucault’s notion of the freedom required for power relations to exist, a freedom which is necessary and without which there really is no hope for change (Paul Rainbow, Michel Foucault, Ethics: Subjectivity and Truth, USA: Penguin Group, 1997, p. 166).

The process is somewhat akin to giving birth: ‘We bring many things into the world apart from children, we give birth to many other things apart from children: love, desire, language, art. Social things, political things, religious things, but this kind of creativity has been forbidden us for centuries. We must take back this maternal creative dimension that is our birthright as woman’ (Luce Irigaray, Sexes and Genealogies, p. 207).  In relation to the social totality, this process brings into focus the relationship of work to the theory, and the change that follows thereafter.

The antithesis of dialectical change articulated by Hegel speaks to this (John O’Neill, Hegel’s Dialectic of Desire and Recognition. New York, Albany: State University Press , 1996). ‘Hegel takes on how the geist of man functions as individual and citizen and the consequence of this to the whole society’ (Luce Irigaray, Sexes and Genealogies, p. 207). Irigaray’s utopia offers a critique of the masculine order of things, of the scientific method insofar as it excludes other ways of knowing, and of the rational mind cut apart from the body-soul, mystical-earthy, ways of understanding. How else but through utopia can this critique be done? As Irigaray states, ‘I am utopic by constraint’(quote from direct commentary at The Luce Irigaray International Seminar, University of Bristol, 2013).